Vodacom, has agreed to cut its data prices following the Competition Commission’s data services market inquiry. Although the network provider has succumbed to two price cuts, the first on 1 April this year and the second a year later, it is still adamant that greater data cost reductions could be achieved should spectrum auctions be rolled out. We agree. Limited supply is bound to increase tariffs, among other factors. Moreover, we argue that delays in the spectrum rollout are having a major impact on key socioeconomic activities including in relation to digital television – visual communication and information is vital.

The rollout process of the International Mobile Telecommunications, referred to as high-demand spectrum allocation, began in 2006 when the Independent Communications Authority of South Africa (Icasa) sought written comments on procedures and criteria for issuing and granting a radio frequency licence. Minimal milestones have been achieved since then with a substantial one being Icasa’s announcement that the spectrum licensing process was scheduled for the second quarter (April-June). However, the 13-year delay places South Africans at a disadvantage; we are far behind other countries in rolling out policies aligned to spectrum such as shifting from analogue terrestrial television to digital broadcasting. Namibia and Botswana are already ahead of us on this aspect.

We have particularly noted how foreign equity investors saw the negativity from South African telecoms companies during 2019 as a much broader and deeper sign of the negative shift on the reform trajectory.

As a key bellwether, we have also pointed investors towards the fact that spectrum has been one of the few areas where President Cyril Ramaphosa has deployed (some) political capital in order to move the WOAN and high-demand spectrum processes in parallel. This is an area with many vested interests. Yet as we shall see below there is still a long path ahead.

Icasa announced that spectrum licensing would begin following three months of public submissions closure (closure was on 31st January 2020) and Ramaphosa affirmed the announcement in his state of the nation address (2020 SONA), saying Icasa would conclude licensing by end-2020. 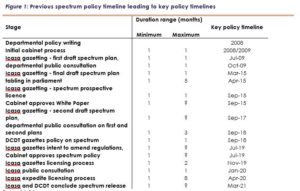 The set licensing date for commencement is not far apart from that of switching from the current analogue television system to digital terrestrial television; the cabinet-approved digital migration date is July 2020; date approval was prior to coronavirus outbreak. Given coronavirus (covid-19) outbreak, we predict a further delay for at least six months.

Although we are undergoing a pandemic, delaying policy reform, including spectrum, is not advisable. More so as employees who are granted leeway to work from home need high speed Wi-Fi, a critical input for rapid information and communication on covid-19.

The current analogue television system “requires a large amount of bandwidth to transmit picture and sound information” while digital terrestrial television requires less bandwidth and recent generation technology, i.e. 5G, would be more effective than 3G and 4G. Migrating towards digital terrestrial television would increase the demand for spectrum. The global international digital migration deadline set by the International Telecommunications Union (ITU) was in 2015; SA still doesn’t seem to be close to migrating.

Sport channels planning to restructure and use internet instead

Although SA’s timing might be off given that we missed the 2015 ITU deadline, we can console ourselves by arguing that reducing data prices and implementing digital migration coincidentally is occurring as sport channel airings are shifting from pay TV to over-the-top (OTT) media services – we got lucky. Spanish La Liga launched its OTT selected sports platform in March 2019 and the Union of European Football Associations (UEFA) unveiled its OTT in June 2019. In 2021, UEFA plans to air its Champions League matches via the OTT platform; this could potentially reduce the uptake of pay TV (such as MultiChoice’s DStv).

Delaying policy reform could be fatal as uncertainty and lack of confidence are anathema to investors and business. We cannot afford to cross our fingers and hope for the kind of luck we had with spectrum and falling data prices. This blog has merely highlighted spectrum delays; a topic we’re interested in exploring as a follow-up is that delayed spectrum distribution based on old regulation raises risks of first-mover advantage resulting in oligopolies and high market entry costs.

I suppose it could always have been worse. Imagine that Nkosazana Dlamini Zuma had won at Nasrec. Her former husband would be in comfortable retirement […] read more

Watch: How can South Africa finance the basic income grant?

South African media has been abuzz with the findings from the Intellidex report on the basic income grant (BIG), as commissioned by organised business. Head […] read more